Nature is a varied field of infinite possibilities. With each passing day some new discovery is stumbled upon and Mother Earth tops what we assumed were her greatest creations. She always shows us the best has yet to come. What always surprises me are the many components to every fiber and layer of life created. Every thing has its purpose, it’s specific duty to the world, down to the human body and the food we eat. I’ve always known certain foods were beneficial to us based on taste, texture, and even location, but never thought twice about the meaning of its color. Each representation of the rainbow possesses it’s unique nutrient to help build immunity and fight disease, keeping the body functioning on an optimal level. 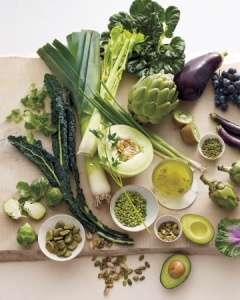 These are foods which contain chlorophyll, the molecule responsible for the process of photosynthesis in plants. Often referred to as the “green blood of plants” because of its close resemblance to red blood cells found in humans. Used mainly for purposes of detoxification, chlorophyll binds to toxins and helps remove them from the body. This “green blood” is also known for its maintenance of the circulatory, immune, and digestive systems.

The nutrient lycopene of the carotenoid family is responsible for the red color/hue found in many fruits & vegetables. Shown to protect blood vessels around the heart and in the neck better than vitamins A, E, and CoQ10, lycopene also delivers oxygen to body tissues. Also shown to prevent against various cancers, specifically prostate and breast. 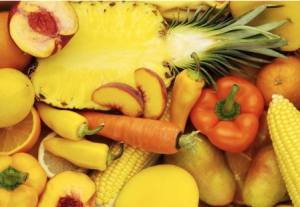 Beta-Carotene, alpha-carotene, and zeaxanthin are a few of the nutrients which give produce its yellow and orange hues. These are foods that promote good eye health, the building of strong bones, and boosting the immune system by fighting off free radicals. 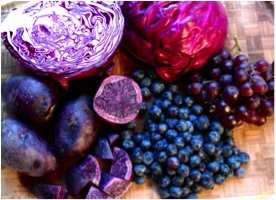 Anthocyanins are the compounds in various fruits and vegetables which give them a blue/purple pigment. This antioxidant acting member of the flavonoid family is known for its various benefits such as improving brain function & memory, reducing the risk of stroke and heart disease, promote healthy aging, and protect cells.

White fruits and vegetables are high in the compounds anthoxanthins and allcin. Anthoxanthins have antioxidant properties which lower the risk for cancer and heart disease. Allcin lowers high blood pressure & cholesterol and reduces the risk of stroke.

It’s important to diversify your palate! Each fruit and vegetable contains a unique color which represents compounds & molecules present that will help aid in maintaining the body’s wellness. Don’t just marvel at the rainbow, eat it!