Since the murder of Michael Brown, it is clear that Ferguson, Missouri has been the civil war zone of the United States. The world is watching this town become the tear-gassing, car blowing, protesting community that is not only fighting against police brutality, racial profiling, and racism, but a loss of a Black young familiar face in Ferguson. A sense of community is not only building in the organizers in this newly proclaimed movement, but a sense of community is also rising in the Ferguson library and the fate of the small Black children there.
In the midst of the movement, Ferguson’s library has been receiving large amounts of donations from donors around the world. This week, the library topped a stunning $350,000 worth of monetary donations and gifts since the grand jury decision! 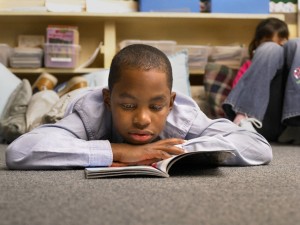 It is very interesting to witness this investment in the library of Ferguson. Understanding how powerful education is to the community, especially during the beginning of a movement against racism and police brutality, will only instill the proper intellectual foundation for children to understand the world better. We are soo excited for the scholastic future of the children in Ferguson!

Check out the full story here:

One thought on “Books for Ferguson!”